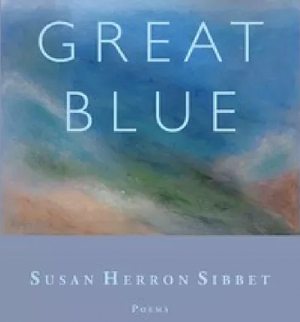 Life After Death—The Gift of Consciousness My life mate of 46 years, Susan Herron Sibbet, passed away three years ago today. She died in my arms, with our children side by side. Our house had become a sanctuary.

Today, amazingly, she lives on in the form of two books that are being published. One, announced today by Sixteen Rivers Press, is called Great Blue and is a compilation of 52 poems from the whole span of Susan’s writing career, lovingly curated by her writing circle. Her friend Carolyn Miller’s painting is on the cover.

Synchronistically, today is also the day Susan’s “imagined memoir” about Henry James’ amanuensis, Theodora Bonsanquet, It’s called The Constant Listener and will be out in the fall.

When I received Great Blue last week, I read it through in one sitting. The last poem really got me and I want to share it here. Susan had cancer for four years, beginning with endometrial cancer in her uterus, then reappearing in her lungs two years later, and finally her brain and bones. She entered a state of grace near during the last year as we all came to accept the inevitable, and concentrated on really being with each other. Her consciousness rings through in this poem, written during that last year.

The Right Angle for Heaven

I wish I could believe

around us and come to us

their arms filled with baskets

their summer hats at the right

Maybe they will bring me

my own hat, a yellow straw one

with a dark ribbon, a bunch of scarlet cherries,

near the curved golden peaches

of the Southern Station, listening

for the conductor to call out,

Then rising, without thinking,

I will choose my destination.