What’s the Future of the Visual Facilitation Field? 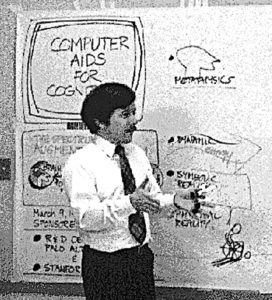 Recently I was interviewed by a bright, young reporter from Communication Arts about The Grove’s work in visual facilitation. “I’m talking to a lot of different people and really wanted to talk with you, an acknowledged leader in this field,” she said. “I want to get to some of the underlying theory and structure of what is happening.”

This opening triggered an immediate cascade of memories back to the 1970s when Interaction Associates, Geoff Ball, Fred Lakin, and I were on fire about Group Graphics, the future of technology, facilitation, and organizations. After all, we were in the curl of the massive wave of rethinking that all of my generation was doing about established institutions. Why not take on knowledge work and how we know what we know?

At the time I was steeped in General Semantics, a somewhat esoteric but very influential movement which should have been called ‘applied epistemology’—the study of how we know what we know and how that knowing guides action. I knew Joe Brunon was doing something called “Generative Graphics” down at Stanford Research Institute. Meanwhile Michael Doyle, an architect, was comfortable drawing all over flip charts in his work. I wasn’t thinking about “leading” anything at this point. I was learning like crazy, and it was a true collaboration.

I did stick with it and write and teach a lot about visual facilitation. The Grove has fielded hundreds of workshops since our first in 1980. Then Wiley & Sons convinced me to begin writing the Visual Leadership Series in 2009, with three books now published. I have thought a lot about our field and now accept the responsibility of being a thought leader, but I still wonder about what this means.

I didn’t review this history that flashed past with my interviewer; memory can work in nanoseconds. But I did respond by reflecting on last summer’s EuViz conference in Berlin, where I was acknowledged as a pioneer in the field at the same time that I was noting the explosive growth in visual practice worldwide. I described my sense of the difference between graphic recording—a kind of visual notetaking—and graphic facilitation, which integrates facilitation and interactive graphic recording to help a group reach its goals. With graphic facilitation, the group is integrally involved in seeing and helping shape the display.

As we talked, I of course had to take a dip into Process Theory and the big insight I had in 1976 working with Arthur M. Young’s theory. I realized that if you think about graphics as a set of processes—creating them on the one hand and perceiving what they mean on the other—that a visual grammar was possible. It resulted in the Group Graphics Keyboard and its seven archetypal display-making processes.

We moved from the Fireplace Room to make way for another meeting and went out to the porch at our Presidio offices. It was a beautiful day, unseasonably warm for January. My interviewer’s leader frame was still “working” me. Then came the question.

The Future of Visual Facilitation

“What do you see as the future of this field?” she asked finally. “Do you think it’s all going to go digital?” This question caught me a bit off guard. I realized I was talking with a near digital native. Aren’t they the leaders? Yet here she was still seeing me as one!

Then I remembered being the keynote presenter in the Organizational Development Network’s first on-line computer conference called Collaborate ’98 (in 1998 of course). I posted a five-page opening essay explaining three hypotheses about the future of collaboration and agreed to log in three times a day for a week and respond to everyone. This was followed by two additional weeks, each hosting another presenter. There were 180 posts that week, two times more than two  following weeks combined. People were interested.

I think that the three hypotheses I had at the time were prescient and are still quite relevant to the question of where things are heading. Here they are:

1. Fewer, better-facilitated F2F meetings: “I wrote in 1998 that there would be fewer face-to-face meetings but they would be need to be better facilitated,” I said. I still hold to this, although at Google last week their Senior VP of Product Management said that they encourage teams to meet face-to-face in small groups. Yahoo mandated working at the office. That’s where the innovation comes from, some people think, in people interacting in real time. Nonetheless, many technology, design, and sales teams work virtually these days, and many other meetings are “blended,” as my colleague Rachel Smith likes to say, with 2-3 who are on Skype or teleconference. I believe there will be a steady demand for those graphic facilitators to become even better at working virtually. 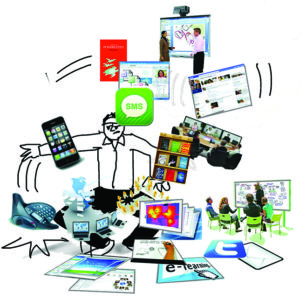 2. Collaboration still requires picking a platform: “My second hypothesis was that there will be a growing number of technology choices, but you still have to choose one,” I continued. I made this point again in my book Visual Leaders (2011). Everyone needs to share and master a common platform to experience great collaborative results in virtual space. Telephone and web conferences provide that for most of us these days, but there are many other choices with more robust capability.

3. Distributed work will require robust meta-models and shared language: “My third hypothesis was that less information on the virtual channels will require more robust meta-language and meta-models,” I concluded. I’m even more convinced of this now and am specifically concerned about the kind of mental models people are using to make sense out of things. Frameworks like The Grove’s Team Performance Model are examples of this kind of conceptual language that supports cross-boundary and distributed work. Shared understanding of these kinds of frameworks allows people to make sophisticated points, functioning a bit like the designs for sports fields. 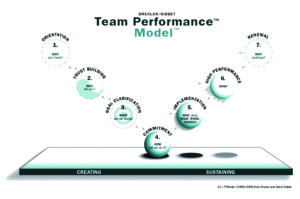 As I talked I began to have some more ideas about what I hope is happening in our field. I was clear that I don’t have some special insight into the future, but I know what I am trying to support. I guess that is something a leader would do.

I know that working visually is a doorway to systems thinking and rediscovering the interconnectedness of things. “A growing number of researchers are coming to understand how interconnected living systems are and how much human cognition is likewise a function of heart, mind and body working together,” I found myself saying. “We are reclaiming our sense of interdependence. Our mental processes and basic metaphors for life, for instance, are now indisputably seen as grounded in our bodily experiences, not as separate, logic things that float in some space of pure mind. We know that living systems don’t work by command and control; they experience emergent order from the cooperation of many independent entities that are all responsive and sensitive to their environments.”

I shared how The Grove is moving toward supporting its network becoming a true learning community that is willing to exchange knowledge and create new knowledge through what we are calling the G.L.E.N. or Global Learning & Exchange Network.

Finally, in terms of my own leadership, I’m supporting the idea that our example keep modeling what groups can accomplish when they truly collaborate. Most important things require that, and most people who are lifted up as leaders give credit to all the other people who helped. Why not celebrate the collective? This is why I love our company’s name—The Grove. It’s the forest, not the tree, that nurtures a vibrant ecosystem. I hope supporting collaboration will be integral to the future of our field.