Working for the Apps

I’ve read about Uber and Lyft, autonomous vehicles and how A.I. is transforming the world. In California arguments about whether or not drivers should be employees or contractors is pulling in parties and opinions from all angles, and has implications for many beyond these companies. It feels
abstract reading about all this in the newspapers or on Medium, but I actually personally connected with the issue with some empathy one morning while taking a Lyft ride to the Newark Airport. 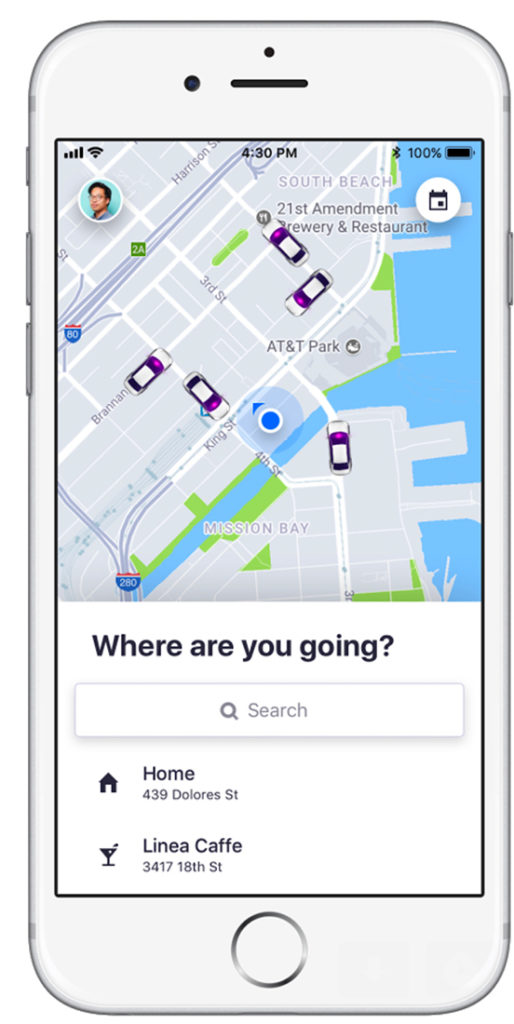 I was concerned about getting there on time, so I scheduled a pickup two days earlier. My Lyft app notified me in the evening that a driver had accepted the request and would be there between 7:15-7:30. I was still nervous and checked to see in the morning. To my relief I saw a map with about five or six Lyft car icons moving slowly around like little bugs with no legs. Soon I got a text— “Your lift is 3 minutes away. Your driver is Fred in a Toyota Camry.” And he was there, at 7:16!

Fred was talkative in a polite way, with an “it’s okay to stop at any time” sort of tone. I was curious. I asked him if Lyft has a dispatcher, but it doesn’t. He used to be a taxi dispatcher in New York City, he said, but now he said he “works for the apps”— the system that connects requests with drivers. All of the communications are driven by AI and the app. “If I go the wrong way it tells me about it; if I can’t get the ride, the app reassigns it.”  I asked if he can call or talk to anyone. “No.” he said with an angled, New Jersey tone implying “are you kidding?”

Fred is an independent contractor with his own car and buying his own insurance, paying his own taxes. “I also work for Uber,” he said, now engaged and seeing I wanted to talk. “And I work for Amazon,” he added. “So, you can have several channels open at once?” I asked.  “If I want to, “he said. “I also work delivering pizza, Doordash, any of them. I work for all the apps. I believe in having alternatives.”

I tried to imagine day after day out on my own, following the apps and picking up passengers. “Do you talk with other drivers?” I asked. I discovered that he doesn’t talk to other drivers. “They aren’t too friendly,” he said. He didn’t seem too bothered. I wondered what he was shutting down to feel good about this.

As we turned to economics, I discovered that it’s a MUCH better deal to work for the apps than driving taxi. “I will get $20 of the $30 for your ride to Newark.” he said. “As a cabbie I could spend 12 hours and can come home with $100. I spend the same amount of time and come home with $500.” He is also a Diamond certified driver. The app counts how many rides he picks up, how many are successful, and logs customer ratings. “They measure everything,” Fred said. His rating is a 98, right at the top, and for that he doesn’t have to stand in cue at the airport. He also gets a better cut from the company. As the full picture began to fill out, I realized that this man doesn’t work for people at all – he works for the apps. And he is okay with it. He attends to the little things to ensure his own stability, but he is on his own.

I began to think about the implications of a cyberwar and having all these app systems getting fritzed quickly.  I shared some thoughts along those lines. He thinks about that as well. In fact, he makes decisions assuming there could be shutdowns. “For $.50 a day I can have my daily earnings transferred right into my bank account, rather than waiting to the end of the week for a summing up and payment. I pay the $.50.”

Next, I asked him if there was a difference between the companies. “One thing that is different about Uber,” he said, “is their investing hugely in driverless cars. They are literally taking the money we help them earn to develop a system to move us out of the business.” He didn’t sound happy about this part. “I don’t think that services vehicles like cars and driverless trucks should run without some kind of human backup. The computer simply can’t track everything. And if they did replace us it would be a huge problem in the workforce because so many of us now depend on having this level of income, compared to working at McDonalds.”

Fred’s dispassion got me to wondering if Fred talks to people where he lives and whether he is part of any groups. I didn’t ask about that but recalled reading Bowling Alone: The Collapse and Revival of American Community a 2001 book by Robert Putnam. He correlated the presence of social capital—the level of affiliative behavior from people engaged in clubs, having people over for dinner, and joining community projects—to education and health statistics. The lower the social capital the higher the problems in other areas. I wondered what communities full of people living the life of Fred and working for the apps will mean for the future. I believe human connection is vital to personal and community health.

This thought led me to wondering later if perhaps Fred was finding relationships with customers that would repeat and come to depend on his service quality. Perhaps I hadn’t really understood. He felt like the kind of person who could form those kinds of connections. But I was informed when talking about this with a colleague that Lyft doesn’t allow drivers to develop repeat passengers. You have to follow the app, he said “They are good conversationalists because the app asks customers to rate the qualities of conversation as part of the feedback.

At the airport I got breakfast from one of the hundreds of iPads dotting the food counter, putting in all the information and order myself and trusting “the system,” Breakfast from the apps, I thought. But in this case real human beings brought the food. But my feeling of being inside a very large and growing, electronically directed system persisted. It must have been this way when cars began to take over. The apps are the tip of a real transformation that’s happening quickly, and it has implications well beyond technicalities. AI is already determining our Youtube feeds, Amazon recommendations, and many of our mutual fund buy/sell decisions. Clearly, at least in Fred’s case, it has replaced managers. We are in this change for better or for worse and we better work to understand it. Something at the center of our life as social animals may be at risk. 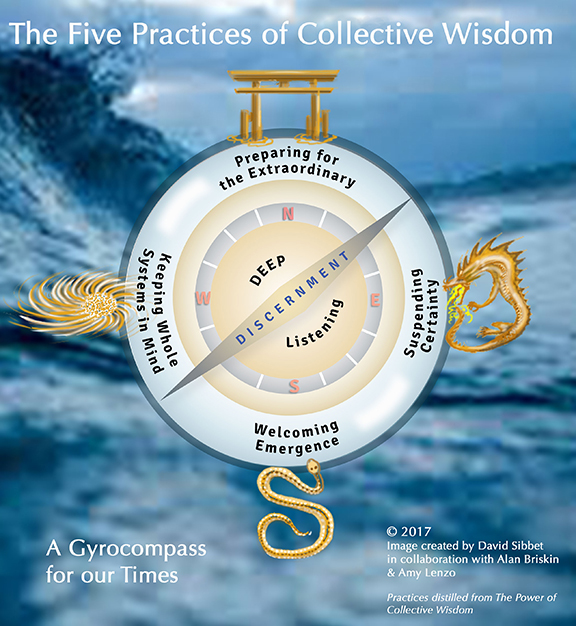 The collaboration began in Germany last year at the Leading as Sacred Practice (LASP) Retreat held at the Beuerhof Farm in the Vulcan Eifel region of Germany East of Cologne. Alan presented about these five practices and led a rich inquiry into what is deep listening, as well as how to suspend certainty, welcome emergence, keep the whole system in mind and prepare for the extraordinary when working with groups. I graphically recorded the session. END_OF_DOCUMENT_TOKEN_TO_BE_REPLACED

Imagine a three channel, six city, tele-computer-graphics meeting with over 40 people involved and lasting four hours. I can and actually helped facilitate one recently when a consumer goods company from France decided to review its plans for talent management in Asia with its teams in Tokyo, Shanghai, Kuala Lumpur, Jakarta, Singapore and San Francisco in a virtual rather than face to face setting. Here’s a picture of our video link (I was represented only by my graphics). 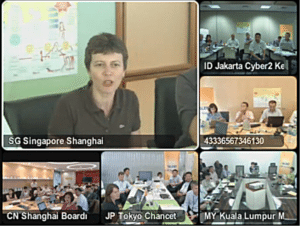 END_OF_DOCUMENT_TOKEN_TO_BE_REPLACED

I finally had time to look at the comic book Scott McCloud created to explain Google Chrome. It’s a tour-de-force well worth the read, regardless of your interest in browsers, Google, or the Internet. It is a terrific example of how powerful the partnering of words and graphics are in what Bob Horn calls the “tightly integrated visual language” of the 21st century.

Click here to see for yourself:  Google Chrome Comic. 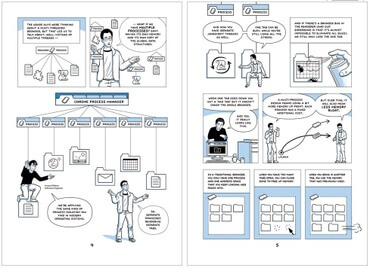