The Power of Frames

Gisela Wendling, my co-author, and I recently had an interesting time experiencing the power of “frames” at the Fielding Graduate School Winter Session in Santa Barbara. (She is an alumni of their Ph.D. program). My attention to this subject was fueled by three experiences; 1) Our holding a small seminar on our new book, Visual Consulting (cover shown on the left here); 2) Gisela’s being asked to share this book as a Fielding alum and experiencing various reactions to the cover. as in “looks like a comic book.”3) My attending a session specifically about “frames” led by one of the founders of Fielding, Keith Melville, and Gisela’s thesis advisor Fred Steier.

Coming home I wondered what would have happened if the cover had looked like the one above on the right, providing a completely different “frame” for the contents inside our book, using only a color gradient to suggest change. It points at different aspects than the cover on the left, perhaps signaling some subtlety in thinking and awareness, something we are hoping to advance with the book in addition to practical tools. I’ll return to this thought.

We arrived in Santa Barbara for the Winter Session very excited by Katrina Rogers, Fielding’s president’s reaction to having read Visual Consulting in advance. She wrote:

Thank you so much for the book, “Visual Consulting.”  I read it over the weekend and it’s a tour de force for this field!  What a pleasure to read—good use of metaphor with “stringing the beads” and it was great to see some examples of projects that I am a little familiar with—such as the UC Merced work. Good of you to include Arthur Young’s work as an appendix.  Although this is a book for visual facilitators, I think a good audience would be any consultants.

Gisela and I wrote this book to communicate directly to two audiences and Katrina clearly saw that. One was visual facilitators and practitioners who are moving toward being more sophisticated about how change really works and wanting to work on longer projects as consultants. The second were consultants of any sort working on change, to understand how shared mental models and metaphors, based on solid theory, could open windows of insight on how to get better results from collaborative processes. Our author challenge was framing this work so both audiences would know it was meant for them.

In working with our editor over the years, we kept hearing that people respond to tools and respond to simple, concrete steps forward, and to keep these things front and center in our writing. We did that. His orientation was supported by my own bias that busy people, and most younger people, are becoming more and more used to getting information in magazine style formats that tightly integrate word and image. These readers want things they can do right away that get results. Visual language, as Bob Horn has abundantly argued in his book by that title, is the “tight integration of word and image” and a relatively new development in the 20th and 21st centuries. It’s becoming the lingua franca of the younger generation.

As a result, as the book cover designer, I biased toward this tendency and created something that would quickly and visually point at the kinds of tools that get predictable and useful results—a bold steps vision, a stakeholder map, and a graphic gameplan.

However, while change may begin with small steps and early wins, truly transformational change takes time and can be very complex. So as powerful as graphic templates are for facilitating strategy and change and getting started, Gisela and I are experiencing that perhaps an even more powerful contribution of our collaboration is having people learn Gisela’s Liminal Pathways Model that illustrates the archetypal process of change as experienced by and responded to by indigenous people throughout history. It very persuasively illustrates the nature of the “in-between” or liminal time in change—something that is systematically short changed in our “hurry-up” times, to the detriment of real change. The middle chapters of the book explain this model, and show how, in the Seven Challenges of Change Framework, this archetypal pattern repeats in longer change processes. It is the contribution we are most excited by and were intent on sharing at Fielding. We did in a small face-to-face seminar and it was indeed well received.

Later, following Fielding’s invitation to be available for book signing, Gisela put the book out on a table and engaged people walking by. In that context, however, the cover seemed a bit out of place. Academic works do not advertise themselves with such an audacious “frame.” The norm is to be subtler. We did not get reactions like Katrina’s from just having the book out.

When I saw that Fred Steier was leading a session on “What a Difference a Frame Makes” at the Winter Session, I had to go.  Fred is a social systems scientist whose wide ranging involvement has included working with family therapists, NASA after the Challenger catastrophe, writing books on reflexivity and editing the Journal of Cybernetics, to currently teaching design thinking among other things. This session directly fueled this post and wanting to share some thoughts about frames with you readers.

Fred told a story about Gregory Bateson, one of his mentors and an influential anthropologist and cyberneticist who first advocated the term “frames” as a concept in human communication. Bateson did some of his early work with chimpanzees and wondered how they knew when neck nipping was a signal to play and when it might be picking a fight. He began to infer that the chimps must be sending “meta-signals” that provided a context for interpreting the nipping gestures. After considerable study he decided to call these “frames”. (He describes this theory of play in his book Steps to An Ecology of Mind according to Fred).

We went on in our very interactive session to explore how symbols and metaphors provide “frames” for our thinking and trigger emotions. Some noted that George Lakoff, a cognitive scientist who has written extensively on this subject, has elaborately analyzed how the “nurturing” frames of liberals contrast with the “punishing” frames of many conservatives—are we “investing” in education or “taxing” for education for instance? Are immigrants “assets to our economy” or “potential terrorists?”

Bateson concluded that the kinds of frames he was observing were meta-signals, inherently relational, and arose from the context of an interaction. “Nipping means play” arose from the relationship. This is not the same as classifications, which are intellectual distinctions, Fred commented. This is a very complex topic, but one point I took away is that any kind of frame ends up providing a context that greatly affects how we look at and interpret things we are trying to understand, especially in relationships between authors and readers.

Frames as a Metaphor

All of our widely shared experience with picture frames is a “doorway” into understanding this idea. A gilded, elaborate frame orients us differently than a clear glass frame with no borders. Each is a meta-signal from the context of the creator, or the gallery, or the museum curator who decided that a specific picture needed this or that kind of frame. But our sense of what the frame means can vary widely depending on our personal experiences and associations—our relationship with this or that kind of frame. For some our Visual Consulting cover will signal that we see graphic books as a seriously evolving form of literature in our times—just the meta-signal they need to open it up and read further. For others it might signal that it’s probably not serious or more about entertainment and marketing.

What Gisela and I are hoping is that, for those of you interested in visualization and change, you will appreciate our taking an integrative approach. Visual consulting is an inner process AND an outer process. It is about awareness and “seeing,” AND about tools and engagement. Imagine it as a key to the power of the subtle visualization practices involved in framing and creating mental models. Imagine that this will help you create “containers” and “crucibles” for change and be invitations to become conscious of both context and content in the process of dialogue and conversation.  And imagine that you will also get a practical, and very “graphic” understanding of why visual facilitation tools and templates are so effective all along the way.

If you haven’t read Visual Consulting yet, please do and jump into our ongoing conversation about all these things, especially the power of frames. 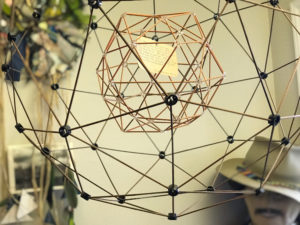 For years I’ve had an open geodesic sphere hanging in my studio with two quotes hanging in the middle. One is by Buckminster Fuller, inventor of geodesics. To paraphrase, he says you can’t reform humans where they are (I think he said “man,” dating him). The best you can do, he continues, is to go into the outlaw area and make it so attractive that people eventually copy you.

On the opposite side of the card is this quote by W. Warren Wagar, historian: “The ultimate function of prophecy is not so much to foretell the future as to shape it.”

As Gisela Wendling and I sit midway through co-creating the fourth book in the Wiley Visual Leadership series, called Visual Consulting: Designing & Leading Change, I find these quotes even more relevant. I know that people like tools and want practical things to do in these kinds of books. But Gisela and I also care about a future that can reclaim other elements that seem to be neglected in our increasingly high tech, maximization-oriented society—such as feelings, deep listening, trusting one’s trained intuition, and having a spiritual practice that keeps us grounded in a time of growing chaos.

So we are writing about a future we hope to shape, one where the utility and excitement of visual facilitation can integrate with what practitioners are learning about the importance of dialogue, as well as with the practices emerging from a growing field of change consultants.

END_OF_DOCUMENT_TOKEN_TO_BE_REPLACED

I am preparing to write a new book called Visual Consulting: Designing & Leading Change, potentially as a fourth in the Wiley visual leadership series. This one will be co-authored by The Grove’s VP of Global Learning, Gisela Wendling, Ph.D., an expert on personal and organizational transformation. It seems right that after so many changes in our own lives, that we focus now on our learning about change, and engage the exploding global network of visual practitioners about how to become skilled consultants with this orientation. Our leading of The Grove’s new Designing & Leading Change workshop the past two years is fueling this new project.

END_OF_DOCUMENT_TOKEN_TO_BE_REPLACED

At The Grove we are officially launching Visual Leaders today. This means that Amazon is shipping; it’s in the stores at Barnes & Noble and Books-a-Million. And one person wrote from Canada that he saw it in Toronto in its “World’s Biggest Bookstore.” Richard Narramore, my Wiley editor, writes that he’s already let a contract for a Chinese translation. The process is a bit like having a baby. In between the nine months gestation and a life time of living with the result is this one moment in time. Print is static. Life is dynamic. One has to imagine all this, whether reading words or looking at pictures.

This image from a Nike meeting captures a bit of this feeling. Can you see the book as a satellite orbiting a fluid environment of issues and challenges?